Martin Gräßlin Criticizes The Delay Of Mir, Yet Again

Hello Linux Geeksters. As you may already know, Canonical has been working a lot at Mir, their own display server, which is intended to be an alternative to the good old X.org server. Initially the Ubuntu developers planed to use Mir as default on Ubuntu 13.10 Saucy Salamander, but the idea was postponed due to some performance issues.

Yesterday, Canonical has decided at the Ubuntu Development Summit (UDS) that Mir is not ready yet to be implemented by default on Ubuntu 14.04 Trusty Tahr, and this brought the criticism of many third party developers.

Martin Gräßlin, one of the KDE developers is not happy about Mir’s delay, since many developers have started to create Mir compatible apps, and for now these apps are automatically postponed.

This is not the first time when Martin criticizes the Canonical’s Mir related decisions. 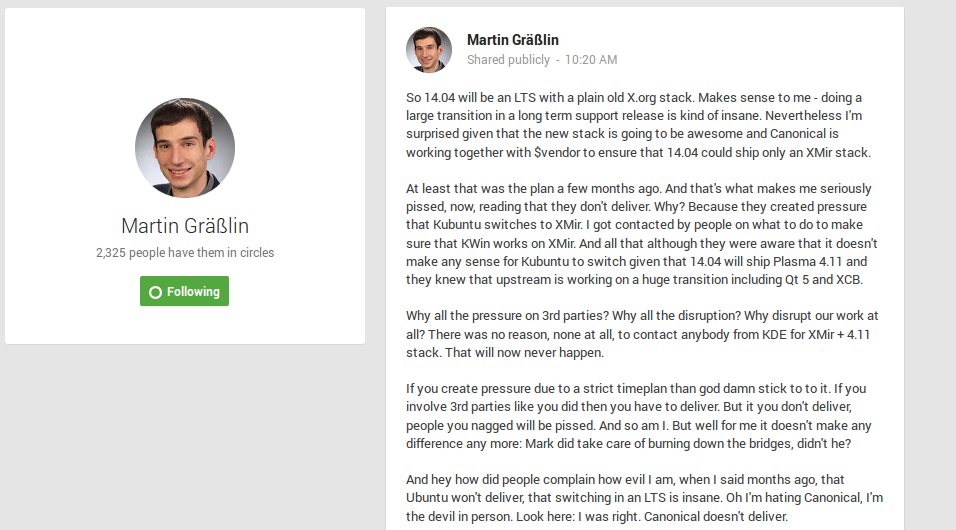 Recently, Mir got an important update, which brought Mir support for the four most important Android GPUs: AMR Tali T-604 GPU (Nexus 10), Qualcomm Adreno 320 (Nexus 4), Nvidia Tegra 3 (Nexus 7) and PowerVR graphics (Samsung Galaxy Nexus). Despite the fact that Ubuntu Touch is created (for now) for the Google Nexus devices, it has been optimized only for running on the LG Nexus 4 phone.

But after the latest update, Canonical’s plan to create Ubuntu Touch images for the Google Nexus 7 and Google Nexus 10 tablets is one step further.

For those who don’t know, Mark Shuttleworth’s big dream is to reach a full convergence between both the mobile and the desktop versions of Ubuntu. At first, Canonical hoped to achieve this performance with the arrival of Ubuntu 13.10, but now, the target will most probably be Ubuntu 14.10, since that will most probably be the first Ubuntu desktop version running with Mir as the default system compositor.