Hello Firefox OS Enthusiasts. As you may know, Firefox OS is a new Linux based mobile operating system, built by using the new HTML5 technology by the Mozilla developers. For now, it is used as default on smartphones with modest hardware specs, developed by LG, ZTE, Alcatel, Geek and a few others. It has been also ported experimentally on the Google Nexus 7 tablet, but there are some apps that don’t work yet. 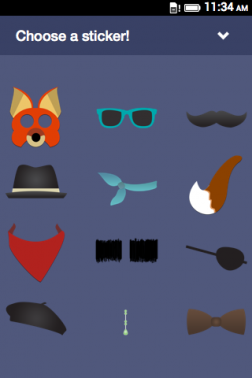 Sticky, a new app has landed to the Firefox Market Place. The app enables the users to take pictures of someone’s face, place one or more stickers on the taken picture and save the picture locally, on the device. To add new stickers, upload 300 x 300 transparent png images to the project’s GitHub page.

Among others, the Firefox Market Place also contains an official YouTube app developed by Google for Firefox OS and Appmaker, an app that enables everybody to easily create web applications for Firefox OS

(via the mozilla blog)