Hello Jolla and Sailfish Enthusiasts. Sailfish OS has recently got official support for HERE Maps, Nokia’s navigation application. We don’t know for sure if HERE maps will be used on Jolla’s new phone, or a new app based on it. Due to the fact that Nokia gifted Jolla many apps from the Linux-based Meego and Maemo systems, it is very possible to see HERE maps on Sailfish OS based smartphones. 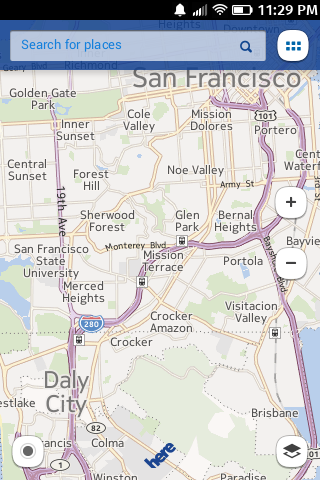 For those who don’t know, Jolla is a project developed by former Nokia employees. The first Jolla smartphone is running on Sailfish OS, a modified Megoo Linux system, which is Android compatible, uses Wayland as the default display server , uses Nokia N9′s Maliit touchscreen keyboard and comes with interchangeable covers, allowing the users to easily switch them, in order to change the color/model of the phone and comes with impressive hardware specifications. Apps can be installed via the Jolla Store, which will provide both Jolla and Android apps, or via F-Droid. Recently, Jolla has enabled the third party developers to upload their own apps to the Jolla Store, via the Jolla Harbour project.