The Second Beta Versions Of Ubuntu 13.10 And Kubuntu 13.10 Have Been Released + Download Links

Today, all the Ubuntu 13.10 flavours have been released as a second beta version. This is the latest beta version available, until the 17th of October, when Ubuntu 13.10 Saucy Salamander will be finally released.

Among others, Ubuntu 13.10 Beta 2 comes with the Unity Smart Scopes, transforming the Dash into a search area, acting itself like a search engine, capable of searching on both the local computer and online websites, updates LibreOffice to LibreOffice 4.1.1, uses Unity 7 as default, working with both XMir and X.org Server as a system compositor, updates Firefox to Firefox 24, despite the fact that there were discussions on setting Chromium as the default browser. Also an Ubuntu One Login Screen has been added to the Ubuntu 13.10 Ubiquity installer, in order to get the service automatically installed.

The second beta version of Kubuntu 13.10 runs on Kernel 3.11, comes with KDE 4.11 preinstalled, brings better support for Xen and KVM virtualization for the ARM architecture, has a brand new wireless setup, adds a new Network Manager applet, bringing a more intuitive user interface. Also Mout Discover has been added in order to allow the user to easily discover and install apps and some bugfixes and small improvements.

To the previous version, it comes with a new About System dialog, which offers a summary of the hardware and software. 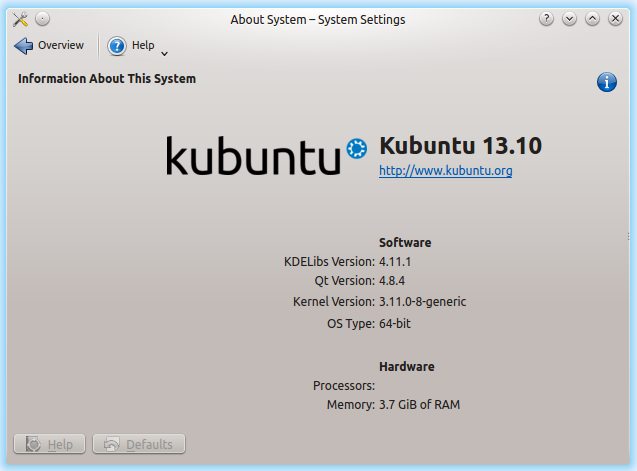