Hello Linux Geeksters. As you may know, Canonical has announced a while ago that GNOME 3.10 will be used as default on Ubuntu 14.04 Trusty Tahr, GNOME edition.

Canonical has set as the default file manager of the GNOME edition Nautilus 3.10.1 (Nautilus 3.10.1-0ubuntu2), which has been specially optimized by the Ubuntu developers, getting the old search replaced by a recursive search function. To use the old search, you have to hit Ctrl + F. 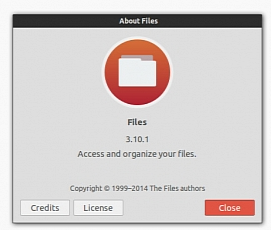 Canonical might implement a lot of new features in Ubuntu 14.04 Trusty Tahr, including the adoption of Qt 5.2, GRUB 2.02 Beta 2, and the torrent lens that enables the users to search for torrents, directly from the Unity Dash. Also, Mate 1.6 and Pepper Flash Player have been added to the default repositories of Ubuntu 14.04, while Unity 7 has been rewritten in GTK3. Also, Boot Repair may be added to the default Ubuntu 14.04 ISO image, in order to help the users fix the boot loader easily.