Ubuntu’s Convergence Has Been Demoed Yet Again, Via The Weather App

Also Microsoft and Apple are interested in achieving convergence, but according to Mark, Ubuntu will be the first converged system.

The idea of convergence is to use the same code base for both the desktop and mobile versions of Ubuntu, the resolution getting automatically resized to be displayed well on the screen. When the system reaches convergence, the users will be able to transform it into a decent computer, by plugging in a monitor, keyboard and a mouse. In mid-February, Jono Bacon has posted a demo video of the convergence with the Karma Machine. 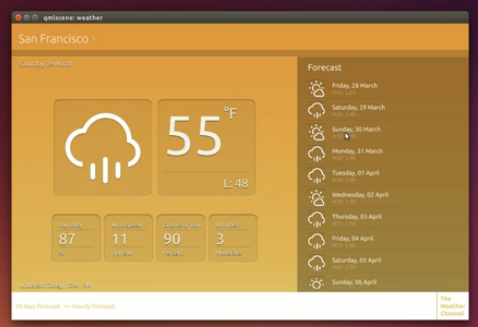 Recently, Jono Bacon has created another demo video of the convergence, with the Weather App this time.

“An example of Ubuntu convergence in action. Here you see the Weather Channel powered Ubuntu weather app first the size of a phone, then a tablet, then desktop, and the content all re-aligns to make the very best use of the space. We then shrink the app back down and everything continues to adjust. All from a single code base,” posted Jono Bacon on Google+.