As you already know, WhatsApp is a popular chat application for mobile devices. With WhatsApp, users create groups and chat each other from their phone for free, or for an less than one euro anual subscription.

The developers tried to port the WhatsApp application to be used on PCs. There was a time when Jabber, Pidgin or other multi protocol chat program could be tweaked to work with WhatsApp, but it does not work anymore.

Another option was to install an Android on a virtual machine and configure WhatsApp, as it was used by a mobile phone, but still, too difficult.

The WhatsApp developers will create a version compatible with the new Ubuntu phone, Ubuntu touch, but since then, Canonical developed the Whosthere app. Whosethere is an open source app that aims to bring WhatsApp to Ubuntu and Ubuntu Touch, enable users to chat from both phone and computer/tablet with their friends.

Whosethere is based on Telepathy and allows users to sync the app with their WhatsApp accout and send text as they were using WhatsApp.

For now, only the users with an WhatsApp accout can use Whosethere. This means that if you don’t have a mobile phone with WhatsApp registered, the service is unavailable for you, since the WhatsApp account needs the phone’s number and IMEI code.

There is a Whosthere PPA available for Ubuntu 12.10 Quantal Quetzal and Ubuntu 13.04 Raring Ringtail, but the app works only on Ubuntu Quantal, for now, and it’s highly unstable.

The new Whosthere update version will fix some things and will run also on Ubuntu 13.04 Raring Ringtail (or at least this is what the developers said), but for now, try it only on Ubuntu Quantal.

This instructions for installing Whosthere work on Ubuntu 12.10 Quantal Quetzal and Ubuntu 13.04 Raring Ringtail (maybe when you will be installing it, it will be updated to work on Raring also): 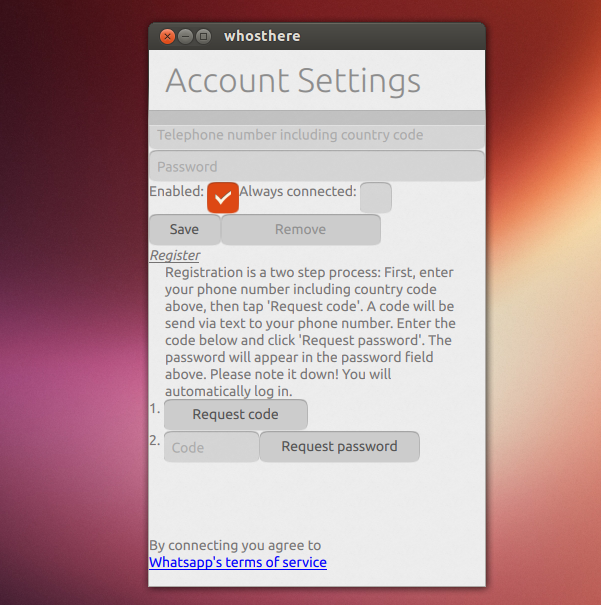 Update the system and install Whosthere:

To run the app, press ALT + F2 and type /usr/lib/telepathy/telepathy-whosthere in the opened command box or write Whosthere in your Unity Dash.

One comment on “Whosthere – An WhatsApp Client Working on Ubuntu”